It’s the time of the year when everyone is thinking about the holiday season. Some are caught up in the very real depression that comes along with it (not I but it’s real so I’m mentioning it)…some are consumed with getting the right christmas tree…some are sick and tired of having nothing to do on christmas day besides chinese food and movies because they don’t celebrate christmas…and some are contemplating skipping the holidays in their entirety and watching every Marvel film and television series back-to-back from Iron Man 1 all the way to Doctor Strange.

However a lot of people are thinking of gifts for their favourite humans and I’d like to suggest giving the gift of art this holiday season. First off, there are many pre-existing choices for you to peruse (check the galleries on this very site or head on over to http://www.adamtupper.deviantart.com for more). Secondly you can totally commission a piece which is even MORE awesome because it’s a one of a kind, unique piece that no one else will have! Included below are some examples of commissions I’ve gotten: 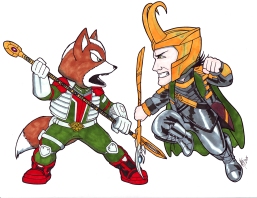 Commissions start around $90 and go up from there. They can be pencil, full colour, paint and appear on paper or canvas. Whatever your non-sexual art dreams are, I can make them a reality. HOWEVER YOU NEED TO ACT NOW!!! Come December 15th I won’t be taking any more commissions for the year so message me right away!

Make the holiday season brighter and less stressful (on both you AND me – sandwiches are expensive these days).

When you create new art all the time like I do, occasionally you’ll have to retire certain prints to keep the originality of the image alive. At this year’s FanExpo I noticed a lot of my very popular ‘Captain Cal and the Tiger named Hobbes’ prints were selling, more than the other Calvin & Hobbes art I sell. I started asking a few people what drew them to the piece and it turns out it wasn’t so much Calvin & Hobbes but the Firefly motif.

Firefly was the brief space western tv series created by Joss Whedon in the mid-2000s that garnered a very passionate fan following. It turns out there’s very little Firefly fan artwork or merchandise available anymore. Given the amount of time that’s passed since the series was on TV (10+ years now) and the continued interest from fans in the series, the lack of product is quite surprising.

This lead me to a decision – since this piece has been one of the most popular among my art, and since it’s popular primarily for the Firefly connection, I’ve decided to retire this art piece. I’ve already printed the final run and am already selling it publicly. Once they’re gone, they’re gone. If you love this piece you’d better contact me right away to reserve your own.

“But Adam,” you may be saying, “If Firefly is still popular then why are you retiring this Firefly piece?!? YOU JERKSTORE YOU!” First of all, calm down, nerdlinger…I got you. I’ll be starting a brand-new Firefly-inspired PAINTING in the coming months that will be a permanent part of my artshow prints. I’ll have big and small prints of it available too! I assure you Browncoats…it will be SHINY.

For now I can only say that this piece has been like a leaf on the wind for me. I’ll miss you Captain Cal…you’ll never take the sky from me.

The end of the year approaches. Sure it’s no longer 30 degrees and sunny outside, and sure you have to drag out that old winter coat that’s covered in cat hair because the cat’s been sleeping on it since it fell in the closet back in April, but on the plus side it’s almost time for the holidays! Whether you’re celebrating Christmas, Hanukkah, Ramadan, Kwanzaa or the time off from work, there’s always something to love about this time of year.

These two items can be found at my Arts Market location (1114 Queen Street East in Toronto) and, of course, directly through me. Discount prices on bulk orders!

This year, give the gift of geek. TupperCards – “For all your nerdy sentiments”

NOVEMBER IS UPON US!

To celebrate, I’ll be at the nerdiest show in the maritimes, Hal-Con Sci-fi Con, happening Nov. 4-6 in my hometown of Halifax, Nova Scotia. This bluenoser is thrilled to be headed back to the east coast for fresh sea air and lots of art sales.

I did Hal-Con back in 2014 and it was a smash success. This year I’ll have tonnes of new art to show the hometown crowd and they’ll be amongst the first to see the new Christmas cards I’m rolling out for the 2016 holiday season.